As Autumn crescendos, and the leaves begin to slip off the trees, blanketing the ground in a kaleidoscope of colors, we search for the spooky in colonial New England. One cannot search for the macabre without traveling to Salem, Massachusetts, the location of the famous witch trials of 1692. As a result of this pandemonium that ensued, twenty-five innocents were left dead, nineteen of those having died from execution–the others died while imprisoned. With Halloween right around the corner, I thought it fitting to travel to this destination, to put my fingers on the pulse of one of the Bay States most famous towns. 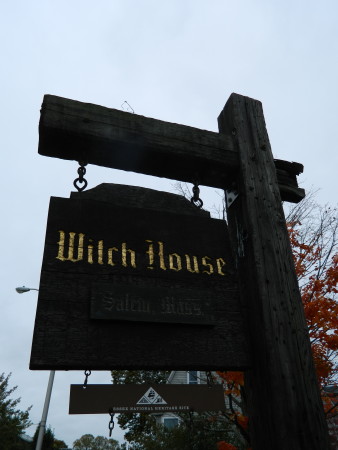 4.) Salem, Massachusetts This town, tucked away along the coast, abutting Salem Harbor, was founded in 1626 by Roger Conant and a group of fishermen having sailed from Cape Ann. Having such a long-standing and old history, Salem has much historical tourism to offer, which is unrelated to the witch trials. Being a conveniently sheltered harbor along the coast of Massachusetts, Salem excelled in world trade and travel, bringing merchantable goods into their community to sell to the rest of New England. Salem had direct trade routes to many locations throughout the world–exotic at that time–and during the colonial era heavily traded with China. Many of the goods from this Asian country can be found today on display at the Peabody Essex Museum in downtown Salem. 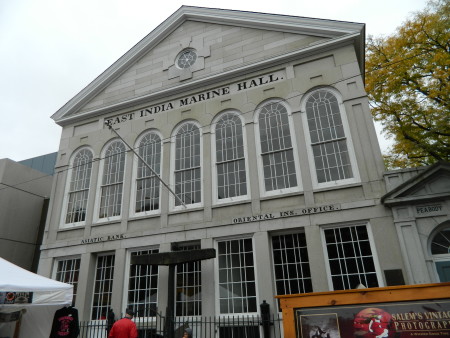 With Salem at one time so heavily entrenched in maritime trade, it is no surprise that they have the Salem Maritime National Historic Site, educating the public on the endeavors of merchants in world trade. Walk along Derby Wharf past the Pedrick Store House–which was moved to this location from Marblehead–and climb on board the boat the Friendship of Salem. This boat is a replica of the original boat of the same name, and now resides resting at the wharf, a relic of a forgotten past. After you tour this boat, walk the half mile to the end of the wharf, where you will find the Derby Wharf Lightstation built-in 1871 and still operates today, illuminating the harbor with its electric light. This prominence does jut out into the shallow harbor waters, so word of advice, bring a coat, because the wind can and will whip up. 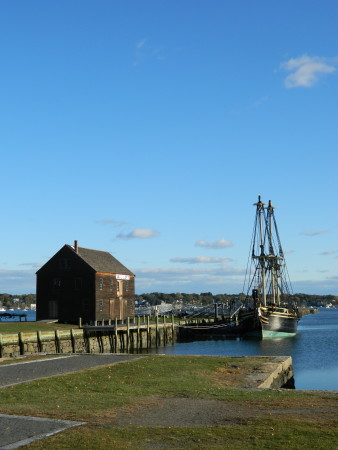 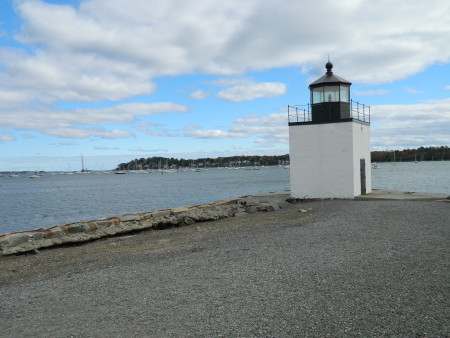 Walk across the road to the Custom House and learn about the use of this building during periods of heavy maritime trade. The building itself is pristine, and a prime example of early colonial architecture. Take a jaunt through the gardens out back, where apple trees loom over brick laced walkways and paths, and the withering gardens seem to still exude an autumnal beauty. Right behind all this is the Narbonne House, an example of early colonial architecture being built-in 1675. As you walk past this house, and peruse its grounds, examine this example of early American architecture. After that walk a few blocks north to the town Commons, and stroll through the park along its lamplit paths. On the west side of the park, at an intersection, stands ominously in all its glory, the statue of Roger Conant. This bronze statue stands in dramatic pose, as his cloak seems to flap in an imaginary breeze, his pilgrim’s hat standing tall on his head, the iconic buckle big enough for anyone to notice from street level. 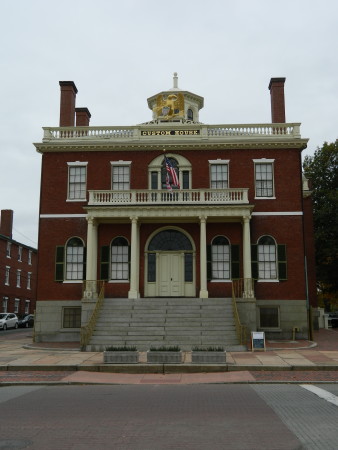 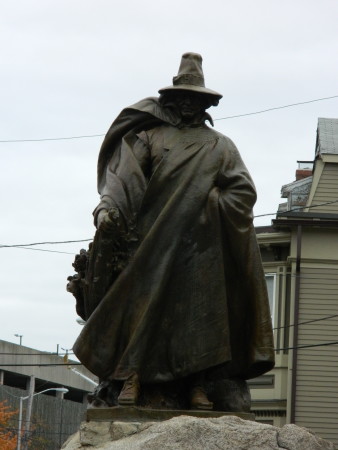 Just down the road from this statue, on Charter Street across from the Peabody Essex Museum, quietly sits the Salem Witch Trials Memorial. This monument rests in a stillness that is befitting for the nineteen that were convicted and sentenced to death by the Council of Oyer and Terminer; another six died in their cells as well, bringing the deaths to twenty-five in total. The simplicity of this monument is perfect for what it conveys, and the most eery part, distant relatives of the deceased leave mementos on the monument stones bearing each victims name. Words of innocence and personal testimony grace the foot stones on the path, which were uttered by the wrongful convicted. 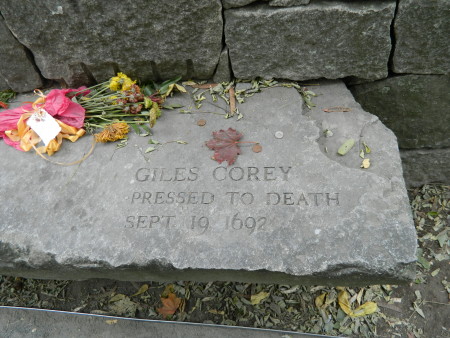 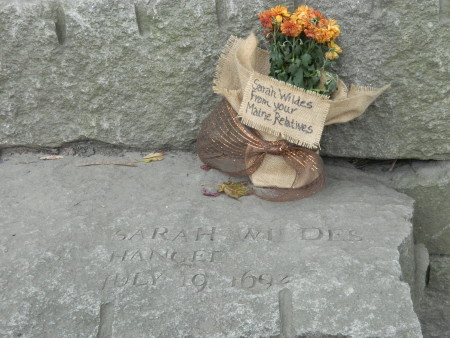 Next to this thought-provoking monument, sitting in all its quietude, is The Burying Point Cemetery. This graveyard has examples of early slate markers bearing death’s-head and cherubs, willows and urns. Famous historical figures rest in this cemetery, such as Samuel Bradstreet, once governor of Massachusetts, and Nathaniel Mather, brother to the ever famous orator and preacher Cotton Mather. If this cemetery was in a wooded section, tucked away down some dark New England road, with snarling maples surroundings its wrought iron fence, even the biggest skeptic of the supernatural would find an eery feeling run through their bones. 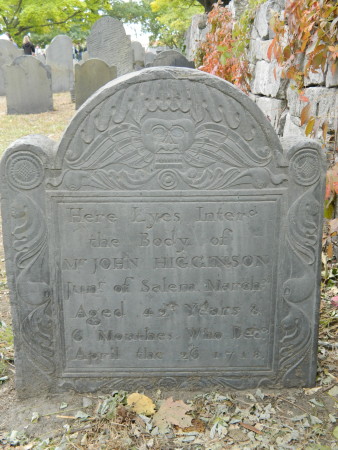 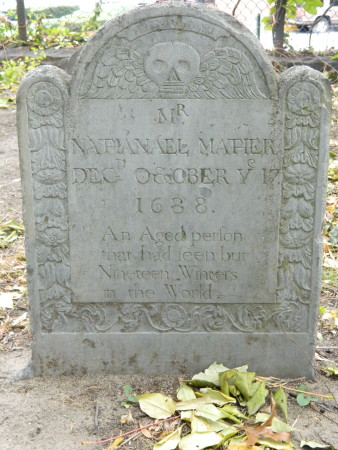 Down the road from here, you will find the Witch House. This house, is the only house left in town with a connection to the trials of 1692, and was the house of Judge Jonathan Corwin, who was sat as a judge at the witch trials. If you would like, take a self guided tour of the house for eight dollars per adult. You won’t just learn about the trials, but how people lived in those times. It is interesting and well worth the money, but I suggest again, going when it is not around Halloween. The house can be claustrophobic with so many people inside, and you feel rushed as you try and read informational placards. 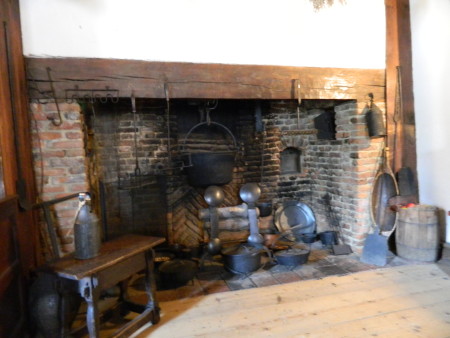 Now Salem is not only known for its infamous witch trials, but also its famous author, the writer who every high school student was subjected to in literature class, Nathaniel Hawthorne. The home which inspired the famous book, The House of Seven Gables, sits along the harbor down Turner Street. This property is quite peaceful, with beautiful gardens and seventeenth century homes surrounding the grounds. A long pergola of wisteria creates a shaded hideaway of respite–a spot most perfect for iced tea on a hot summer day. Take a tour of the Turner-Ingersoll Mansion, which was the inspiration for Hawthorne’s famous novel, and is one of Salem’s oldest homes boasting its creation to 1668. The tour is well worth the $8.50 per adult, with an informative guide who knows much about the history of the location, author, home, and time period; this all lasts about an hour. Afterwards, you can stroll around the gardens, pop into the gift shop on the grounds, and take a self guided tour of the Hawthorne house, which is the home the author was raised in. 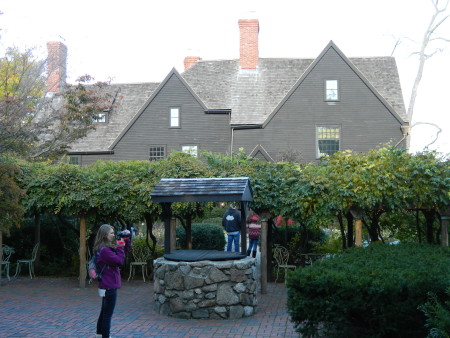 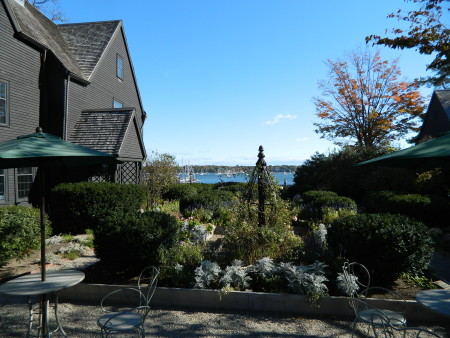 Lets get away from history, and lets drink. At the corner of Jefferson Avenue and Jackson Street sits a gem of New England, one that I feel honored to have experienced. Far From the Tree Cidery is a great place to sit around a barrel with friends, and grab a flight of their ciders. For ten dollars you can order a flight from their extensive menu, and enjoy all the different flavors, the delicious, spectacular flavors. If you are a lover of Halloween, sci-fi, and regional literature, you will love this place. Their special for the month of October is a Lovecraft inspired cider, a different one released each week this month. We were lucky enough to be at this happening taproom on the week they had Cthulhu, a cider made with anise and squid ink. Although I am not a fan of licorice, this was very good. The sweetness of the apple and the anise blended well together to create the perfect amalgamation of flavors. The room, which is a garage from an old scooter service station, has a large wooden bar, black walls, low industrial lighting, and all the way in the rear of the open space, sits the bourbon barrels aging the delicious nectar, for all patrons to see. Here at Far From the Tree, the owners have done it right. This is the type of place that makes you want to come back and visit Salem, if only to drink there. You feel at home in this space, you feel welcomed by the warm staff, and the owner, who has no problem taking time to talk to his customers–and has an incredibly awesome beard. Also, did I mention, their ciders are phenomenally good. Delicious, tasty, scrumptious, these are the words that come to mind when I think of their business. So if you don’t care about history, but love cider, go to Salem, you won’t be disappointed. 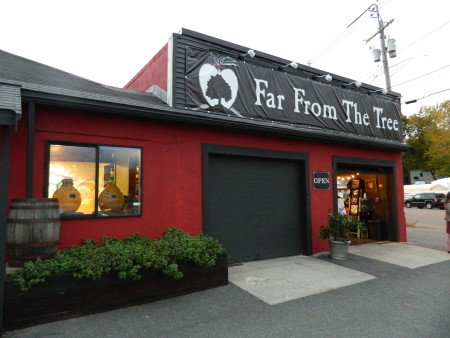 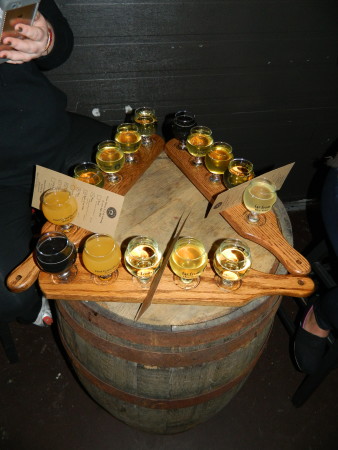 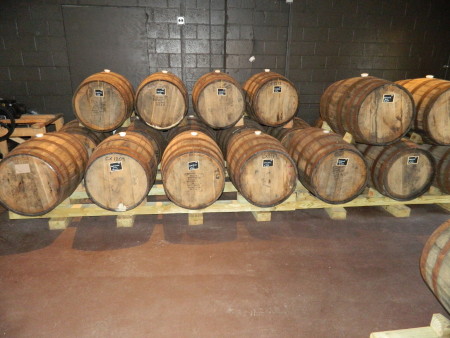 There are many good restaurants in Salem, but one really stuck out in my mind. In a Pig’s Eye is a bbq joint in a small corner building. The one story brick building is a small cozy space with interior brick walls, and quirky, nifty decorations. The atmosphere is hip, with personable staff, and a warm vibe to the joint. The food was phenomenal. The bbq is perfect, the burgers flavorful with no need for condiments they taste so good. They have craft beer on tap, and good drinks. The prices are decent, and right for casual dining. Like I said, there are many restaurants in Salem, but this stood out. 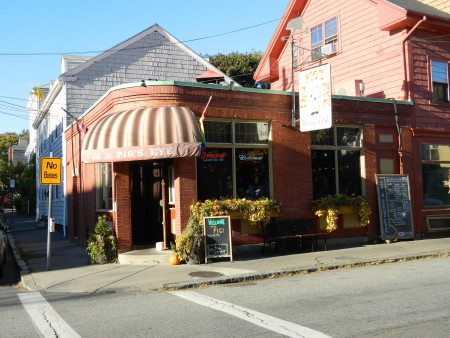 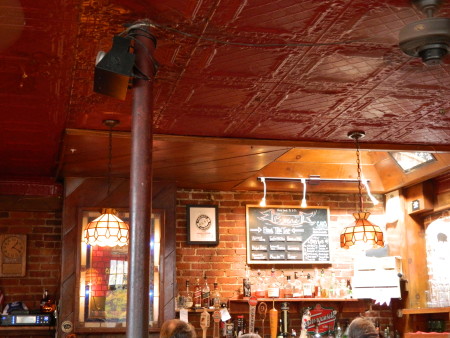 So, you are probably thinking, what about the halloween events. Where are the witches and the street fairs? They are there in Salem, some encompassing whole streets that are shut off to auto traffic. We walked down these streets…and it was not for us. There are cool things to see, such as oddly dressed people performing in the streets, dressed like horror creatures from movies or straight from the imagination, and live musical acts. There are witch tours, and many shops cater to those who believe in the supernatural or the arcane arts of witchcraft. We originally went down for the kitsch, but found ourselves steering clear because of the crowds. Blaring, loud, heavy metal music filled some streets. People were shoulder to shoulder along avenues and roads, trying to get their photo taken next to Frankenstein or a demented evil clown. As we left town, there was a string of cars for miles on end, bumper to bumper, entering the town. 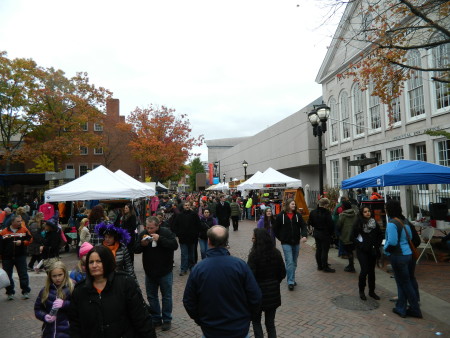 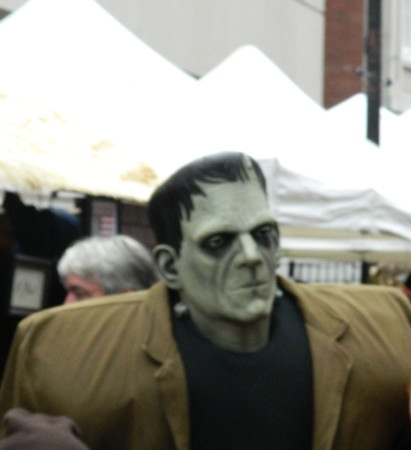 If you are into history, tours of historic homes, and maritime history, come to Salem when it is not Halloween. If you are in the mood for a cider with chill people, come and visit Far From the Tree! But if you are looking for the gaudy halloween experience, like a street fair dressed up in slasher costume, come to Salem the last two weekends of October for some ghoulish fun, and remember, bring your best costume! 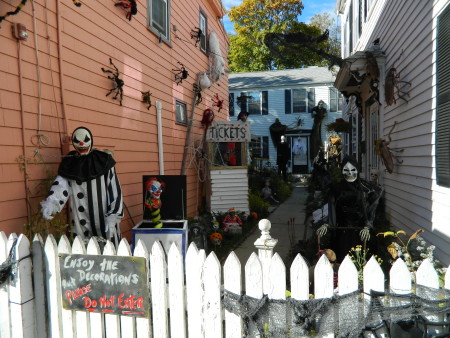 David Jester lives in the Midcoast region of Maine. He received a masters degree in American and New England Studies from the University of Maine. David is a full-time firefighter/paramedic and writer, who maintains another blog www.firefighterwithapen.com. He travels the world, but chooses locales that many would never consider for vacation. The world is full of many different and unique places, why not see them all?